Two of his daughters — Karen Williams and Patty King — have alleged he was poisoned by his business manager Laverne Toney and his personal assistant, Eonline reported.King died aged 89 on May 14 in Las Vegas, where he lived while he kept up a gruelling schedule of tours that ended only last year. King suffered from Type II diabetes for the last two decades of his life.
“I believe my father was poisoned and that he was administrated foreign substances to induce his premature death,” the daughters wrote in separate but identical affidavits, the entertainment site said.
“(I) request a formal investigation into this matter,” the court documents reportedly said.
Despite his legendary musical status, King’s final days were clouded by an apparent dispute between his family and manager over his care.
View gallery 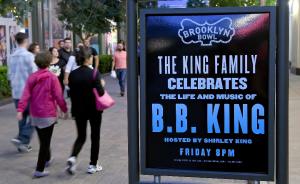 A sign outside Brooklyn Bowl Las Vegas at The LINQ Promenade advertises a celebration of the life an …
Toney, who is the executor of King’s estate, shrugged off the daughters’ charge.
“They’ve been making allegations all along. What’s new?” Toney said, according to Eonline.
An attorney for King’s estate also dismissed the daughters’ accusations as “ridiculous”.
“I hope they have a factual basis that they can demonstrate for their defamatory and libellous allegations,” Brent Bryson said in a statement, according to the entertainment site.
Earlier the local coroner confirmed the homicide investigation and said that King’s remains would undergo an autopsy.
“Our coroner takes jurisdctn over #BBKing body, performs autopsy. Results:6-8wks min. Homicide investgtn w/ @LVMPD,” the Clark County, Nevada coroner’s office announced on Twitter, referring to the Las Vegas police department.
Given the timeframe for the autopsy, local media reported King’s burial in his home state of Mississippi will likely be postponed.
Riley B. King was born in poverty and grew up working in cotton fields, but went on to master the guitar and entered the music business after travelling to Memphis and working for radio stations.
He became known as the Beale Street Blues Boy, which eventually earned him the moniker B.B. King.
For decades, King played shows almost every night, becoming the premier ambassador for the blues — the music genre that emerged from African American spirituals in the Deep South.
King won 15 Grammy awards over his career and is considered a master of the guitar who influenced a generation of musicians.
In Memphis, his longtime place of residence, the B.B. King Museum and Delta Interpretive Center opened in 2008 to showcase artifacts from the legendary guitarist, as well as the cultural heritage of the Mississippi Delta. 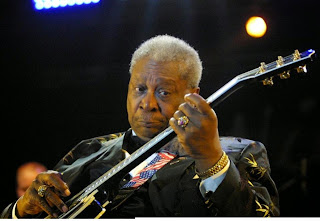 Cause of death of child in swing undetermined after autopsy