Share
Facebook Twitter LinkedIn StumbleUpon Tumblr Pinterest Reddit WhatsApp Telegram Share via Email Print
Share
Bill Cosby is a garbage human being— let’s get that out of the way. He used to be one of the most beloved men on TV. He used to be a well-respected stand up comic. And he used to own a 1967 Shelby Cobra Super Snake. You know, before he was sexually assaulting women (allegedly).
But it’s that third part that’s really interesting— because I had no idea. Bill Cosby owned an extremely rare 1967 Shelby Cobra Super Snake. How the hell did that happen? For one, he and Carroll Shelby were close friends. They actually bumped into each other in a department store in 1966. From there, Cosby and Shelby struck up a rather weird friendship.
Shelby agreed to build Cosby one of only two Shelby Cobra Super Snakes, as long as he promised to stop driving his Ferrari, of course. It had 900 horsepower, and an alleged top speed of “over 200 mph,” which is exactly what Cosby wanted. Unfortunately, Bill Cosby is as terrible a driver as he is a human being.
He and his wife took delivery of the car. He went down the street, turned the corner, and immediately spun the thing. That’s when his wife got out, walked home and told him to “Sell it!”
He gave it back to Shelby and told him to do with it what he wanted. Cosby actually recounts the story in his stand up album — ironically titled — 200 MPH:
The car itself was actually a 1965 Cobra that Shelby just happened to have lying around the shop. Shelby tossed in two superchargers, an automatic gearbox, and gave one to Cosby (CSX3303) while keeping the other for himself (CSX3015). But after Cosby decided to get rid of his, the car was picked up in San Francisco by Tony Maxey. Unfortunately, Maxey couldn’t handle the sheer brunt of the car and drove it off a cliff along the Pacific Coast Highway, where he later died from injuries. 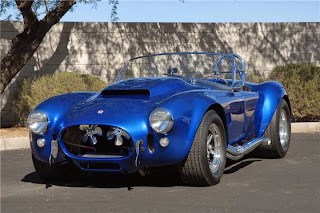