The boat was first spotted last Thursday when it was stranded with a broken engine, says it is filthy and covered in insects.
It was one of many boats carrying thousands of Bangladeshi and Rohingya migrants adrift in the Andaman Sea.
Amid a mounting humanitarian crisis, Malaysia and Indonesia have said they will offer migrants temporary shelter.
Foreign ministers from the two countries plus Thailand have been holding emergency talks in Malaysia’s capital, Kuala Lumpur.
Smaller fishing boats picked up the migrants from the trawler and took them to shore
The boat has a few floors below the deck that are covered with filthy plastic bottles and clothes
There are insects crawling all over the walls
Speaking after the talks ended, Malaysian Foreign Minister Anifah Aman said his country and Indonesia would stop towing the boats into other territories as navies have been doing in recent days.
He said we “need to assist these people” and that “because of the conditions they are experiencing we are willing to take them on to our shores”.
However, he said they would not actively search for migrants, only provide shelter if they came ashore, and then under the condition that the international community would help to repatriate or resettle them within a year.
Thailand was apparently not part of the announcement and has not yet commented.
‘Towed out’
The migrant boat which arrived off Indonesia’s northern Aceh province on Wednesday, was first spotted last on Thursday.
The migrants said they had been repeatedly towed out to sea by regional navies
Those on board says at the time that they had been abandoned by a people smuggler and had little food and water. The boat then went missing.
The migrants have now told activists they were towed out to sea three times by the Thai and Malaysian navies. Malaysian authorities escorted them virtually the whole way to Indonesia warning them never to return. 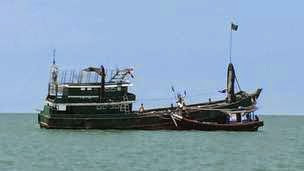 Buhari not a Religious fanatics