If you don’t have integrity, you have nothing. You can’t buy it. You can have all the money in the world, but if you are not a moral and ethical person, you really have nothing.-Henry Kravis
I read with utmost dismay, a statement written by Buruji Kashamu via his media aide, Austin Oniyokor in response to my commentary titled; Buruji Kashamu: Buhari’s First Litmus Test,  published few days ago.
Naturally, I find it nauseating to respond to this recidivist asinine posing as a philanthropist and would have directed him to face his drug trial in the United States just like Asiwaju Tinubu did but for posterity and record purposes, one now have to utter this rebuttal.
It is shameful that in a society like ours, individuals like Kashamu can summon such effrontery to distort such indelible and notorious allegations on his criminality let alone aspire to seek political office. It is more gross that such questionable individual will have to sit in the upper chamber of our country’s legislative house to make laws and rules that may be used to bring his peers to justice.
I understand to individuals like him, integrity remains oblivious having been traded in the Hulls, on one of his numerous voyage to deliver the crystalline compound, so he may find it hard to believe there are still individuals in the world who expresses themselves without being paid to do so and no volume of parochial write ups can take the place of undiluted conviction.
I am from Ogun East and possess the locus to demand that an alleged fugitive like him, spuriously dragged into the upper chamber to represent my district cleanse himself of the scandalous accusation of drug-related charges. It will be a further dent of whatever is left of the goodwill of this country with someone like him moving round the exalted title of the Senator of the Federal Republic of Nigeria, with drug or heroin baggage still as front pocket badge.
If truly Kashamu believes he is innocent of these allegations, I will advice he divert his resources on proving his innocence by visiting the United States, albeit such visit should be embarked upon with adequate backpacks in case of extended stay.
I will be more than willing to organise a mammoth crowd to welcome him at the airport and further organise a grand reception for him if he is acquitted.
SR 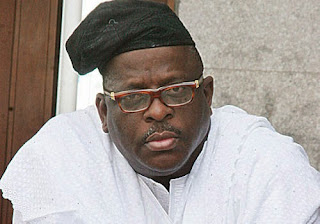 12 Nigerian Soldiers On Deathrow Afraid For Their Lives As Starvation