By Alastair Jamieson
The Germanwings co-pilot suspected of deliberately downing his plane in the French Alps appears to have rehearsed the tragedy by entering crash-altitude settings on the aircraft’s previous flight, investigators said Wednesday.
A preliminary report released Wednesday by French investigators said Andreas Lubitz repeatedly set the altitude dial on the Airbus A320 to 100 feet while alone in the cockpit en route from Dusseldorf to Barcelona on March 24. That flight landed normally in Spain, investigators at French safety agency BEA announced.
Cockpit voice recordings show that Lubitz, 27, locked the captain out of the cockpit during a bathroom break on the return flight to Dusseldorf and crashed it into a mountainside, killing himself and 149 others on board. The captain can be heard on the recordings demanding to be let back in and trying to break down the door.
Related: Would you fly without a pilot in the cockpit?
Wednesday’s report found that air traffic controllers and military defense personnel tried to contact the plane on 14 occasions while it was descending, adding that the doomed jet had been cruising at 273 knots but its speed was deliberately increased to 345 knots as it headed towards the mountainside.
No manual change to the jet’s path was recorded until 93 seconds before impact, the report stated.
“The sound of breathing was recorded on the [cockpit voice recorder] until a few seconds before the end of the flight,” the report said.
Flight 4U9525 smashed into the ground at 9:41 a.m. local time (5:41 a.m. ET) — nine and a half minutes after the captain got up from his seat.
Wednesday’s preliminary report said the ongoing investigation “will also study the systemic failings that may have led to this accident or to similar events,” including medical regulations for pilots and cockpit door rules that were introduced after 9/11.
Lubitz’ professional level “was above standard,” the BEA report added.
The co-pilot had been treated for depression in the past and a search of his home revealed he had researched suicide methods on his tablet computer days before the crash. Investigators also found torn-up sick notes.
The Federal Aviation Administration awarded Lubitz a U.S. pilot license in 2010 despite concerns about his mental fitness.
Records posted online show he applied in 2010 while he was employed by Lufthansa and training at a flight school in Phoenix. As part of the application, he initially submitted a medical form to the FAA asserting he had no mental disorders. He then resubmitted the form acknowledging he had been treated for severe depression from 2008 to 2009.
Watch video  http://player.theplatform.com/p/7wvmTC/MSNBCEmbeddedOnsite?guid=n_mj_pilot_150506_584597&autoplay=true# 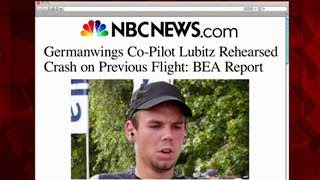 The Senate has passed violence against persons Prohibition Bill which seeks to prohibit female circumcision, forceful ejection from home and harmful widowhood practices.

Joke from us,put a smile on your face